Dining Success – How to Match Your Food and Wine Perfectly 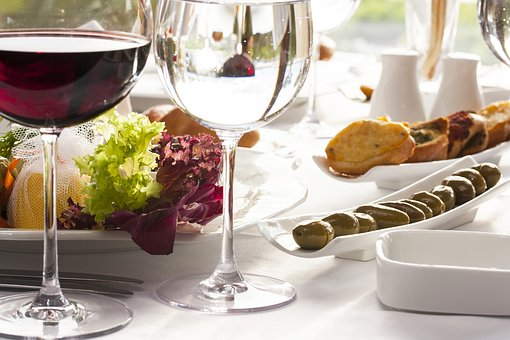 Your food and wine should work together in a complementary relationship like a good marriage. Each one should bring out the best in the other, supply what the other lacks, and (sometimes) even set up an advantageous antagonism (like, for example, sweet-and-sour foods and sauces). It's all just a matter of achieving the best possible taste.

Most of us are aware of only the basics of wine and food pairing. You know . . . serve red wine with red meat and white wine with fish and seafood. We are also vaguely aware that the wine and the food should somehow complement each other. And that's about as far as our knowledge goes. So let's dig a little deeper and look at a helpful example.

The Purpose of Pairing

So why does it really matter? Can't you just serve any wine you like with your favorite food? Well, of course, you can – you're free to do anything you want. But if you want to bring out the best in both the food and wine, have a tastefully successful dining experience, and maybe impress that special someone, then you need judicious food and wine pairings.

The sole purpose of a proper food and wine pairing is simply better taste all around along with a more pleasurable dining experience. A good pairing, then, does a double-sided, reciprocal job when it comes to taste and pleasure. The wine and the food each make the other taste better than it would all on its own.

Your food and wine should work together in a complementary relationship like a good marriage. Each one should bring out the

best in the other, supply what the other lacks, and (sometimes) even set up an advantageous antagonism (like, for example, sweet-and-sour foods and sauces). It's all just a matter of achieving the best possible taste.

But, sometimes, finding the perfect pairing can be a pretty elusive gol.

The Results of Poor Pairing

So let's take a look a look at what can happen when you get it wrong . . .

In some wines, it is the sweetness or acidity that is the primary aspect of taste and flavor. And when you get the pairing wrong, that primary flavor component can be either diminished or amplified too much. And then keep in mind that a wine can take on different flavors according to the foods it is paired with.

Similarly (but less often), the wine can transfer some of its flavor to the dish or the food to the wine. A bad pairing will result in the appearance (or at least the perception, which ultimately amounts to the same thing) of a new, unexpected, and usually undesirable flavor. And, worst of all, a truly poor pairing allows either the wine or the food to overpower the delicate flavor of the other.

Here, then, are the two most important tips for getting your food and wine pairing right . . .

First of all, carefully consider the wine. Riesling, for example, is produced in such widely separated corners of the world as the Clare Valley in Australia, British Columbia, and Germany. This delicate wine can have an astounding variation in flavor, ranging from acidic and citrusy to somewhat sweet to fairly dry. It all depends on a wide variety of factors, including the area of origin, the at which the grapes were grown, and the age of the wine. What this means, then, is that this wine, depending on the particular Riesling, can be successfully paired with everything from salads and vegetables to fish to pork to barbecued chicken wings.

That's a broad spectrum of possible pairings with just one particular wine. The first , then, is to know your wine, especially the sub-species of the wine in question.

Your second important consideration is, of course, the food that the wine is to be paired with. And you can't neglect to take into account the manner of preparation (say, fried or baked or grilled) and and sauces and other enhancers as well. These can dramatically change the flavor of the dish and, consequently, the best wine to go with it.

Just keep in mind that there's a lot more to the flavor of the dish—and the wine that goes with it—than merely the fish or fowl in it.

An Example: Port for Wine and Food Pairings or as a Stand-Alone

Typically when we think of port, a pretty definite image comes to mind. We tend to conjure images of portly men with side whiskers reading newspapers, discussing religion and politics, cracking jokes and walnuts, and smoking cigars, all the while hiding out from wives at their gentlemen's club. Maybe that was an accurate description of port drinkers in the past, but today port enjoys a much broader fan base, along with a much extended area of production.

And when it comes to wine and food pairings, port is now associated with more than just nuts and tobacco.

A Brief History of Port

Port wine takes its name from the city of Oporto in the Douro River Valley of Portugal. It came into being in the late 1600s not by design, but by accident and necessity. In 1678 England declared war on France, blockaded ports, and made it impossible for Englishmen to get their beloved Bordeaux, forcing English wine merchants turned to Portugal for a source of wine. But wine making had not reached the heights in Portugal that it had in France. So the English had to take a hand in it themselves.

To improve these inferior Portuguese wines, which were darker and more astringent, and to make them stand up under rough Atlantic voyages, brandy was added to make them more palatable on delivery. Later, it was learned that brandy added during the fermentation process would stop fermentation and stabilize the wine and further enable it withstand the rigors of travel. And the result was a sweet, high-alcohol-content, rather thick wine known as port.

There are now several types of port: vintage ports, ruby ports, white ports, and tawny ports. Vintage ports have been held in the bottle for at least 10 years to ensure maturity. Ruby ports, on the other hand, are younger wines that still retain their ruby-red color. White ports possess varying degrees of sweetness, with a floral, fruity flavor and lower alcohol content. And tawny ports have been aged for long periods, sometimes up to 100 years, in wooden barrels and so assume an amber hue and a nutty character.

Generally, for appropriate wine and food pairings, port is most often matched up with sweets, cheeses, and nuts. The sweeter ports, vintage and ruby, are usually paired with English Stilton cheese, cheese cake, chocolate, and sweeter fruits like pears and strawberries. Tawny port often finds itself alongside Roquefort and blue cheese, fresh peaches, or caramel-based desserts. But a quality, long-aged tawny port, such as that made by Seppeltsfield, is often best as a stand-alone wine.

Port as a Stand-Alone

One of the prime production areas for port is now Australia, especially the Barossa Valley in southern Australia. Here, Seppeltsfield produces some of the finest ports in the world, and one of its premier ports right now is the 1910 100-Year-Old Tawny. It is, according to Seppeltsfield, a "full-bodied tawny style, awesome in its power and concentration," and "every drop holds the promise of an exquisite life-enriching experience." And this may just be more than mere hyperbole.

This tawny port produced by Seppeltsfield, having been aged in wooden barrels for 100 years, is an intense and viscous port. It is concentrated, owing to evaporation over those 100 years, and has a burnt-toffee, caramel, nutty character. While appropriate wine and food pairings can no doubt be found for this port, it is probably best experienced on its own.

If, like most of us, you're on a tight budget and can't afford 100-year-old wines, but still want to enjoy some excellent port, you're in luck. There are plenty of great ports available for under $20, both ruby and blended ports. Just check out these great possibilities . . .

Quinta Do Noval Black – This is a top-notch fruity port and possibly the best port around for under $20. It boasts aromas and flavors of dark fruit accompanied by a long full-bodied finish, along with hints of chocolate and spice. Quinta Do Noval Black is a fortified wine that can serve as either a before- or after-dinner drink. It is great served alongside chocolates.

Croft's Fine Ruby Port – After three years of aging in oak, Croft's Fine Ruby Port comes out with a deep ruby color and possesses flavors that bring to mind plums, blackberries, and cherries. This port also has certain earthy notes like smoke, spice, and licorice. All of this makes it particularly complex and great on it own or paired with appropriate cheeses.

Warre Warrior Port – Having been in continuous production since the mid-eighteenth century, it is the world's oldest brand. Warre Warrior a complex, fruity port carrying notes of chocolate, ripe plum, and nuts. This is an award-winning fortified port and is renowned for its consistency.

Fonseca Bin No. 27 Port Wine – A top choice under $20, this wine is particularly fruity with flavors in the plum and big-berry range. It is blended from several different vintages and is, as a result, very reliable from year to year. Fonseca Bin No. 27 serves well as a relaxing after-dinner drink.

And now you just need to know the simple tricks to keep your weight down and the fat off after indulging in all that great food and wine.