St. Patrick's Day Parades and Festivals Across the Globe 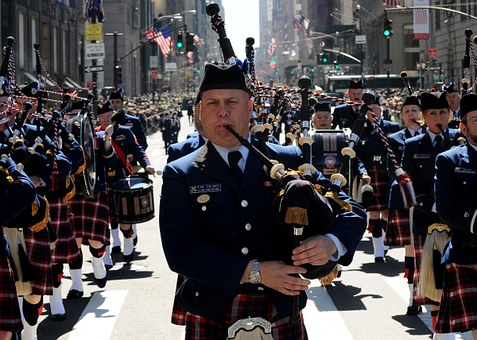 It's a big world out there, and St. Patrick's Day is a popular holiday. So there's a lot more to St. Patrick's Day than planting potatoes and eating corned beef and cabbage. Let's take a look then at some of the rowdiest, Irish-est, greenest St. Patrick's Day events in the weirdest, unlikeliest places around the world . . .

When you think of the biggest and best and most exciting St. Patrick's Day celebrations and parades, you probably first think cities with huge Irish populations like, say, New York City (where the first recorded St. Patrick's Day parade was held in 1762) and Boston – and rightly so. But it's a big world out there, and St. Patrick's Day is a popular holiday. So there's a lot more to St. Patrick's Day than planting potatoes and eating corned beef and cabbage.

Let's take a look then at some of the rowdiest, Irish-est, greenest St. Patrick's Day events in the weirdest, unlikeliest places around the world . . .

Considering the longstanding animosity between the Irish and the English, you might not think of London as a venue for one of the biggest St' Patrick's Day celebrations. But it is.

Concentrated in the heart of London in Trafalgar Square, this event attracts 150,000 visitors and boasts a green-hued parade that leaves Piccadilly, passes several renowned London landmarks, and winds up at the Square. Now approaching its second decade of existence, the London St. Patrick's Day celebration "showcases the best of Irish song, dance, culture and arts, including London Irish sports clubs, dance schools, marching bands and pageantry. Other attractions throughout the day include an artisan Irish food market, ceilidhs, comedy and film festivals as well as a variety of children's activities" (Trips to Discover).

Toronto has hosted "one of the biggest and wildest St. Patrick's Day Parades in North America, and the world, for more than 150

years now" (Trips to Discover). The 90-minute parade, which processes from Bloor and St. George to Queen Street at Nathan Philips Square, kicks off the event and draws more than half a million spectators every year.

Post-parade celebration continues at the city's restaurants and bars, many of which hold special holiday events. Recommended spots include "the Watermark Irish Pub & Restaurant, with its prime waterfront spot offering amazing views, as well as McVeigh's, the quintessential Irish bar that's been at the same location at Church and Richmond for nearly 50 years" (Trips to Discover).

When you think of things Irish, Seattle doesn't often come to mind. Still, it is rainy and green like Ireland and so has been dubbed the "Emerald City." Seattle's St. Patrick's Day celebration, which draws 20,000 attendees, begins with a parade from the Seattle Center. Additional attractions include live performances, visual arts, hands-on activities, games, abundance of food, and a marketplace. You will also find plenty of Irish music and dancing, booths stocked with Irish products, and cultural exhibits. Those interested in their Irish heritage can attend the workshops dealing with genealogy and the Irish language.

It may be where they speak French, but Montreal is also the host city of the oldest St. Patrick's Day parade in Canada, almost 200 years old. The St. Patrick's Day celebration goes back to 1759 when it was observed by Irish soldiers of the Montreal Garrison with special dinners and religious services. Today's parade is a three-hour procession led by a Grand Marshal and includes floats, bands, community groups, and cultural/ethnic groups. The city's pubs and restaurants feature special menus and host special events for the occasion.

Kiwis are fond of St' Patrick's Day too. In Auckland they have the proud distinction of holding the celebration on this day located farther away from Ireland than any other, about 11,300 miles from Dublin.

Green is the keynote in Auckland on St. Patrick's Day. The 1,076-foot-tall Sky Tower is lit up in a greenish hue throughout the whole day. And the parade "features entertainers in orange and green with Irish banners, floats, dancers and bands" (Trips to Discover). You can also take in the Irish Society's Fair Day, which features activities, food, face painting, Gaelic football, and Irish music and dancing. And there is the green-themed event called "The Greening" revolving around food and drink and special entertainment.

Munich has the beer, but it also has the largest St. Patrick's Day parade in Europe outside of Ireland. It was started about 20 years ago some Irish expatriates and today boasts over 15,000 participants and spectators. Munich's St. Patrick's Day celebration is a three-day weekend affair packed with special events just before March 17. There is also a big After-Parade Party featuring marching bands (of course), Irish bands, and children's entertainment. And consumption of the famous German beers takes a backseat to Guinness drinking.

Buenos Aires may be known as the "Paris of South America," but on St. Patrick's Day it becomes Irish. The capital city of Argentina is home to the largest St. Patrick's Day celebration in all of South America, which includes elves, fairies, and Irish dancers. Not only does Buenos Aires "put on a spectacular parade, [but] it hosts an annual street party in the city center with lots of music and dancing, including Irish-flavored rock groups like The Kilt and Tartan Army, and Celtic Argentina, one the largest Irish dance schools in South America and the largest in Argentina" (Trips to Discover).

Yes, believe it or not, they actually do celebrate St. Patrick's Day in Moscow. In fact, the parade, first held in 1992, draws thousands of Muscovites who congregate on Novy Arbat to watch the parade and participate in festivities. This parade has a peculiarly Russian flavor with its Cossack horsemen and marching bands, as well as huge Irish wolfhounds and floats sponsored by local bars. And everyone gets involved, including police and government entities such as Moscow's Irish embassy.

Not your usual venue for St. Patrick's Day celebrations, Tokyo is now home to several parades. The impetus for these St. Patrick's Day parades came from the Irish Network Japan with the aim of introducing the Japanese people to Ireland and Irish culture. The parade, then, displays a celebratory mix of traditional Japanese dress and Irish costumes.

Tokyo's main St. Patrick's Day parade is big deal, with appearances by several foreign dignitaries over the years, including Ireland's Deputy Prime Minister Mary Hearney in 2001. "It's cheered on by as many as 30,000 spectators, and there are also an increasing number of Irish pubs that send over attractive women known as 'voucher girls' to the parade to pass out free beer. The city's Omotesando shopping district is draped in tricolor flags, and a cast of floats, Irish dancers, leprechauns, and Irish setters and wolfhounds all entertain the crowds" (Trips to Discover).

St. Patrick's Day celebrations in the Caribbean? Yet bet, especially on the tiny island of Montserrat in the Lesser Antilles. In fact, this island nation is the only other nation in the world besides Ireland to observe St. Patrick's Day as a public holiday. It came about like this . . .

Montserrat is a British Overseas Territory settled in large part by Irish pioneers who brought their festivities and shamrocks to their new home. And in 1768 a slave revolt occurred in which slaves attempted (mostly unsuccessfully) to throw off the rule of the Irish planters. These things got mixed together in the cultural stew, and today the celebration commemorates both the slave freedom fighters and the Irish Catholic element in the island's history.

So today, "March 17th is celebrated with a week-long festival of independence, with the main event as the Masquerade, in which Montserratians dress in colorful hats that resemble bishops' miters. They also dance Irish jigs and crack whips in mock defiance of their one-time masters. Irish sing-alongs and historical lectures are common on the holiday as well" (Trips to Discover).

And, of course, we can't just leave it at that . . . without including a couple of mentions of the expected . . .

The Windy City is known for hosting one of the most impressive St. Patrick's Day celebrations in the US and in the world, really. The parade is impressive, but the real draw in Chicago is the green river.

Every year, the Chicago River is transformed from a muddy brown flow into a long stretch of startling Irish emerald green – and has been for the past 60 years. This provides an eminently fitting backdrop for the parade that processes from Balbo Drive to Monroe Drive with floats, bands, bagpipes, and Irish dancers.

And then there's Dublin, the capital city of Ireland, at the heart of all St. Patrick's Day celebrations. It's an all-out four-day festival

during which the city looks like a sea of green attire and green hats. The parade, the main event, includes fantastically imaginative floats and both local bands and bands from other countries, including the US and Brittany. And in keeping with Irish ways, the Irish Craft Beer & Whiskey Village is usually open "showcasing great beer, whiskey, artisan food and entertainment."

So if you get an itch to travel for St' Patrick's Day, you'll find no shortage of huge events across the globe. And be sure and eat your potatoes – it was the lack of this food, primarily, that that scattered the Irish to the four corners of the world.