DIY Gift and Craft Projects for Vintage and New Handkerchiefs 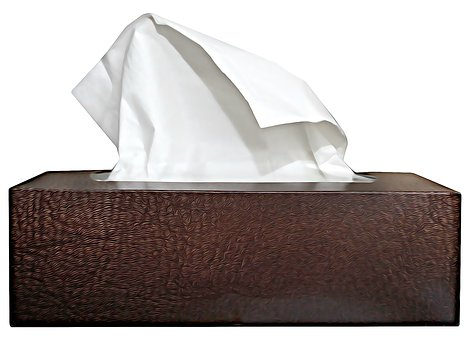 Handkerchiefs can be used for easy DIY projects to make gifts for friends or family. You can also use them to make adorable wedding and baby-shower favors. And, of course, handkerchiefs lend themselves admirably to the making of holiday decorations. Really, you are limited only by your imagination and creativity – and it's not as difficult as you may think.

There was a time, believe it or not, when we didn't have disposable tissues (which we invariably call Kleenex regardless of the brand). All those jobs that tissues do now the handkerchief used to do. And that's why your grandparents always carried one.

But now that you do have easy access to a variety of tissues, you can use your handkerchief for more than cleaning a child's face, mopping your brow, or blowing your nose. In fact, handkerchiefs have found their modern calling mostly in the area of arts and crafts, gifts and adornments – especially beautifully embroidered, lacy vintage handkerchiefs.

Handkerchiefs can be used for easy DIY projects to make gifts for friends or family. You can also use them to make adorable wedding and baby-shower favors. And, of course, handkerchiefs lend themselves admirably to the making of holiday decorations. Really, you are limited only by your imagination and creativity – and it's not as difficult as you may think.

Let's take a look at a few things you can do with handkerchiefs . . .

1. Handkerchief Baby Bonnet – "If you or someone you know has a special wedding handkerchief, it can be fun to make the hanky into a baby bonnet. This project doesn't require any cutting, so you can actually take the bonnet apart to use it as a handkerchief again someday."

2. Hanky Shadow Box – "If you have a vintage hanky that is too fragile to use for sewing crafts, you can create a display in a shadow box. This can also be a fun handkerchief craft for special wedding or graduation hankies."

3. Vintage Hankie Pillow Cover – "It’s a sweet and simple project you can create in time for valentines day. This would even be a

great project for a beginner or for a child who’s fairly comfortable using a sewing machine. I thought of these pillows one day after I saw some of my vintage hankies. Their colors were perfect for valentines day, and I thought they would add a little bit of character to an empty chair or sofa."

4. Handkerchief Tissue Holder – "I don't know about you, but I am always reaching for tissues in the car. Having a 4 year old doesn't help. There is always something spilling or some kind of mess happening. Tissue boxes are so ugly. I decided to make something pretty."

5. Hankie Pin Cushion – "Need a place to put all of those sewing needles? These pin cushions made out of ladies handkerchiefs are absolutely adorable and functional at the same time!. . . [T]hese pin cushions can be made in minutes!"

Handkerchiefs have also found a special use in that unique New Orleans way – a city like no other. And that is in the second line parade.

As you know, people everywhere and in every culture have always had rituals and rites to celebrate and commemorate the major events and passages of life – particularly birth, marriage, and death. That's what the New Orleans-flavored second line parade is.

Second line parades are the direct descendants of New Orleans' famous jazz funerals, which included a casket, a host of mourners, and a band. Today, there "are dozens of different second line parades put on throughout the year, usually on Sunday afternoons, and held in the French Quarter and neighborhoods all across the city. They range in size, level of organization and traditions, but in all cases they will include a brass band, jubilant dancing in the street and members decked out in a wardrobe of brightly colored suits, sashes, hats and bonnets, parasols and banners, melding the pomp of a courtly function and the spontaneous energy of a block party, albeit one that moves a block at a time" (FrenchQuarter.com).

And today, especially for wedding second lines, revelers carry white handkerchiefs (often specially embroidered for the occasion) that they wave as they dance and process.

The term "second line" is used to refer to the revelers and participants who aren't the principals in the event, but join in to help celebrate and carry the jubilation and excitement forward. For a funeral, for example, the family members of the deceased and for a wedding, the main wedding party would form what is known as the "first line." "[T]hose who follow along, dancing and singing as they go, form what is known as the 'second line.' Second lining can also refer to the type of dancing that usually goes on at these parades – a wild, strutting dance step to carry participants forward in pace with the brass band – so one can go to a second line, be in a second line and do the second line all at once" (FrenchQuarter.com).

Originally, second line parades were primarily a kind of funeral procession. Jazz funerals have been a big part of New Orleans culture for a long time, and the second line phenomenon grew out of that. A funeral second line usually consists of the hearse moving from the funeral to the burial service, the guests and participants (both first line and second line), and a jazz band. The idea is to celebrate the life of the deceased.

Today, however, second line parades are more commonly a wedding phenomenon, celebrating in a formal and peculiarly New Orleans way the beginning of the couple's new life together. "Usually, the second line brings the guests and bridal party from the ceremony to the reception. The newlyweds lead the procession, umbrellas in hand, while the wedding party and guests follow the band with handkerchiefs" (FrenchQuarter.com).

So leading the procession is the first line – typically the band and the ones being honored, the bride and groom. The just-married couple usually head the procession carrying decorated umbrellas or parasols. Following the couple and the band (and often the other main players in the wedding party) are the guests and, really, anyone else who wants to join in. These make up the second line, usually dancing, strutting, and waving handkerchiefs.

Read the full story of the second line parade in "The Second Line Parade – The Cultural Exuberance of New Orleans Going Wide."

Sean Gautreaux came up with this year's trend in Mardi Gras throws – you know, the beads, medallions, and so on thrown out to the crowds from the floats. It happened like this . . .

It happened (or, rather didn't happen) on Sunday, January 20, 2019, in a game that could have – should have – sent the New Orleans Saints to the Super Bowl. It was that most famous (or infamous) of all pass-interference penalties that wasn't called.

So Gautreaux thought yellow penalty flag throws would be the perfect way to laugh in the face of that football tragedy, to give it an ironic twist and wring out a little humor. He set to work making Mardi Gras penalty flag throws that would take place of the penalty flag never thrown in the game. Saints fans are, after all, mighty loyal.

The yellow handkerchief referee flags were thrown in several of the parades – for example, Krewe of Endymion, Krewe of Alla, Krewe of Muses, Krewe D'Etat, Krewe of Bacchus, Legion of Mars, Krewe of Eve, Krewe of Bonnepart (Lafayette, LA), and more. And how big was this thing really? Gautreaux delivered 400 flags to a krewe on a single day – and that was only a fraction of the total number.

Certainly, the people who came back from Hurricane Katrina could survive a football catastrophe. And they did it with a humorous ironic twist. There may lie ahead a long Super Bowl Lent (at least a year long) for the Saints and fans, but at least it was kicked off with a big Mardi Gras penalty flag party. "A laugh" – that's the healthy way to deal with it, Gautreaux said.

Wholesale For Everyone – Your Craft Handkerchief Source

And while buying in bulk means significant savings, the benefits go far beyond that. When you sign up for our exclusive membership, you get special privileges and access to offers like . . .

Wholesale for Everyone really is for everyone – everyone who wants to buy quality handkerchiefs and save money.

Buying by the dozen is the most profitable, so reach out today and set up a wholesale account.

Fun and Easy Bandana Halloween Costumes When You're Short on Time